There has been much in the news recently about changes to Antarctica’s unique environment.

Just last month, a paper in Nature reported that the continent has lost nearly three trillion tons of ice since 1992 and days later we were reminded that plastics are present in Antarctic waters. So it came as no surprise when IAATO received a question from one of our Facebook followers about the possible impact of tourism on Antarctica–and of course, being a membership organization with a mission to conduct safe, environmentally responsible Antarctic travel, it’s something we think about daily.

The Facebook post also cited the revelation about ice sheet loss and asked how many expedition ships Antarctica –among a list of other locations –could handle. Is it a matter of time before expedition ships will be “rafted together alongside each other” in Antarctica, asked the poster–to which we say, perish the thought!

Since its inception back in 1991, IAATO has taking a proactive role in managing pressure on the Antarctic environment, working within the framework of the Antarctic Treaty System to help visitors have an enriching experience while having no more than a minor or transitory impact. Part of this work involves the annual launch of our Ship Scheduler -a database which has restrictions on time, number of passengers allowed, and number of daily of visits to the most popular sites around the Antarctic coast. These restrictions follow Antarctic Treaty System and IAATO requirements. In short, our members book visits to certain sites and these make up the structure for their expeditions in the upcoming season (It’s important to point out here that IAATO operators keep flexible itineraries to work around Antarctica’s changing ice and weather conditions). 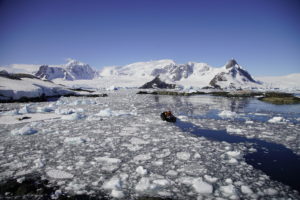 The Ship Scheduler, which this year, incidentally, launches on Wednesday, is an incredibly important tool for managing pressure on Antarctic visitor sites. The scheduler also adds another level of safety for IAATO vessels, in addition to our Vessel Tracking Scheme, as IAATO operators have an idea where the rest of the fleet is, and in case of emergency are able to be as self-sufficient as possible, using other members. Before each Antarctic travel season begins, we share our ship scheduler with the fiveMaritime Rescue Coordination Centres with responsibility in Antarctica so they also know where our member vessels are in case of an emergency.

Only ships carrying fewer than 500 visitors are allowed to make landings at approved sites in Antarctica and only one ship can visit each site at a time. There is a maximum number of ship visits allowed per day and no more than 100 passengers can be ashore at one time.These guests take nothing home but memories and leave nothing but footprints; no snacks ashore, no taking souvenirs from the shoreline. There’s a staff to visitor ratio of at least 1:20 to ensure these policies are followed, but in truth we find that for the majority of guests, ambassadorship for this astounding place is part of the experience. By the time they reach Antarctica, guests understand their role in visiting the continent responsibly. They’ve received mandatory briefings, scrubbed their clothing and equipment clean and had opportunities to attend lectures and workshops about wildlife, governance and science, or even contribute to research themselves.

It’s our belief that by leading expeditions to Antarctica with responsible environmental practices at their core, guests, representing more than 100 nationalities on average each season return from the white continent with a greater understanding of its environment, its value to global science and how changes there can impact all of us. This is why responsible travel can be part of the solution to protecting our special places.