As we mark Polar Pride Day today (November 18), marine biologist Huw Griffiths shares his experience of polar science as a member of the LGBTQ+ community and the importance of embracing diversity, promoting visibility, and allyship as a force for creating positive change.

As far as I know, being gay has never held me back in my career as a polar marine biologist. I have had some amazing opportunities to travel the world for fieldwork and conferences including visiting both poles and every continent. However, my positive experiences as a white, British, gay man are definitely not representative of those of other colleagues both in the UK and around the world who aren’t in my privileged position.

For most of my 20+ year career I have found that being a member of the LGBTQ+ community and a polar scientist has always felt like a rare thing. ‘Out’ role models have been non-existent and for years I thought I was probably the only one. Having visible role models and colleagues at the start of my career would have given me more confidence to be myself. With the advances in networking and social media it is now possible to reach people all around the world. That is why last year’s Polar Pride Day was so important to me. It gave a platform and a voice to LGBTQ+ people living and working in or studying the polar regions and for allies to show their support.

Polar research suffers from a public perception of a field that is dominated by macho stereotypes and historic explorers as white as the icy regions they visited. Modern polar research has a place for everyone, but the demographics of this vital area of global research will only change if we make the effort to welcome people who have been previously excluded. I work with the Diversity in UK Polar Science Initiative to help break down the stereotypes and barriers in polar research. I hope that having an initiative like this will mean that existing and future polar scientists will see that being yourself and being different are no barrier to working in the most extreme environments on Earth, and can be a real asset as a scientist.

The Diversity in UK Polar Science Initiative was launched as part of a series of activities to mark the 200th anniversary of the discovery of Antarctica. It was conceived and funded by the UK Foreign, Commonwealth and Development Office Polar Regions Department in partnership with British Antarctic Survey and other partners, to celebrate existing diversity, and take important steps forward to promote and enhance polar science opportunities to under-represented groups, including women, people from ethnic minorities, BAME, LGBTQ+ community and people with a disability.

Through our outputs and activities, we aim to make people feel like they aren’t the only one and to raise awareness of issues which hold back LGBTQ+ polar researchers, and therefore polar science as a whole. This can only be achieved with the support of the entire Polar science community. We hope that Polar Pride Day 2021 will be even bigger and better than last year, bringing polar people together wherever they may be.

About the Author | Dr Huw Griffiths 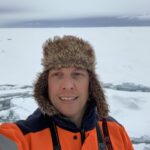 Dr Huw Griffiths is a , Marine Biologist with the British Antarctic Survey and has spent over 20 years working on the unique biodiversity of the polar regions and participated in several expeditions to Antarctica and the Arctic, studying everything from the beaches to the deep sea.

He is a passionate believer in science communication and making science more accessible to the public, policy makers and government, and In 2020 he won the SCAR Medal for Education and Communication.

Prev article Back to Blog