Whale populations are booming in Antarctica, for now. This is the best news ever, and for those of us who make the annual trek to work ‘on the ice’, seeing more and more whales each year is heartening.

I grew up whale-watching in California’s Monterrey Bay, and am now an expedition leader, a champion of citizen science, and a PhD student studying the humpback whales of the Antarctic under University of Santa Cruz biologist Ari Friedlaender.

In a study, published in May 2018, Friedlaender’s lab found that more than half of female humpback whales have been pregnant at any time on the Antarctic Peninsula in recent Antarctic summer feeding seasons. They’re making babies to fill the void left by last century’s intensive industrial whaling that left, when the killing stopped, only a tiny percentage of the whales once found in Antarctica 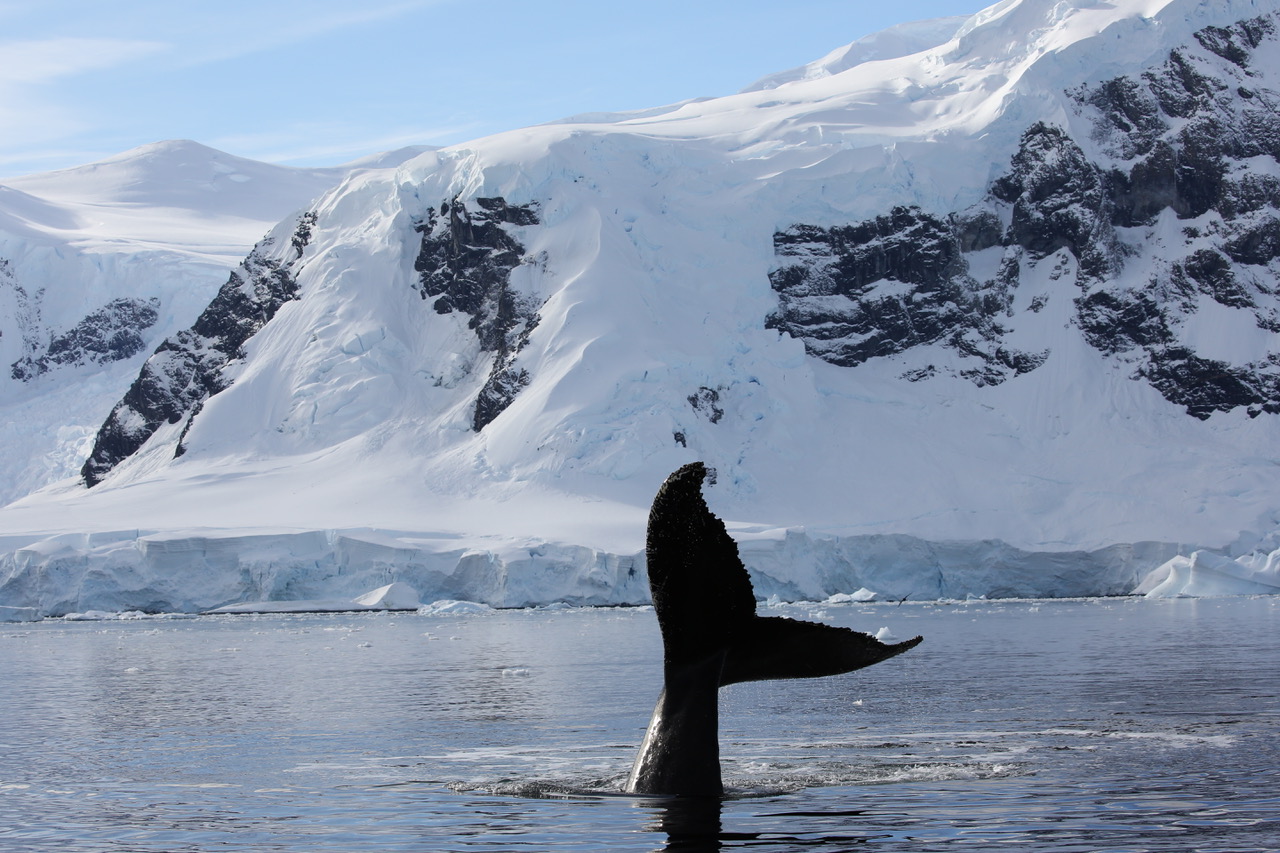 Antarctic travelers are now being treated to more and more whale sightings. Year-on-year the whales are rebuilding populations towards what was natural before the whaling era. But nobody knows how many whales there were, either before whaling, after the whaling ended, or even now. These are really important questions especially as we see the decline of sea ice and a growing krill fishing industry.

As travelers to Antarctica, we have the opportunity to do more than just enjoy whale sightings on our voyages; we can contribute to science by photographing these whales, gathering data that researchers can use to understand whale populations. See, the tail of every humpback whale is unique like a fingerprint. If we record where and when a photo was taken (which our cameras can do if set correctly), each photo is a point of data. For science, unique identifiable markings on a whale’s flukes (tail) and dorsal fin allow us to non-invasively track whale movements and stories over time. By focusing on whales, we bring attention to the marine ecosystem as a whole and the challenges we face as a global community.

Photos that clearly show the underside of the tail of a humpback whale can then be matched – using automated image recognition software and the eyes of dedicated scientists and volunteers – to a growing database of over twenty thousand whales worldwide. Each match is significant, and any whale that is not matched is a new discovery for science, a new whale that we will look for in the future. Contributors can feel good about contributing to science, and through the citizen science web platform Happywhale.com, each contributor is notified of what is found in their photos. When their whale is identified, they get a notification, and if that whale is seen again, perhaps with a calf in the waters off Colombia or Panama where they go to mate, contributors are notified again… “Your whale has been re-sighted!”

This Antarctic summer has proved to be an amazing year already. Happywhale has recorded over 325 humpback whale sightings in Antarctica this 2018/19 season, at time of this writing, 90 as known individuals, compared to just 150 sightings this time last year. One part of this is increased participation, but there is no question we are seeing more and more whales.

About the Author | Ted Cheeseman

Ted has over three decades of experience in responsible tourism management, including leading polar expeditions and serving on the executive committee of the International Association of Antarctica Tour Operators (IAATO) for five years, advocating and promoting safe and environmentally responsible private-sector travel to Antarctica. Ted has experienced first-hand the impacts of humans on marine ecosystems. While some current trends are encouraging – the recovery of many great whale populations, for example – many trends highlight the challenges facing marine wildlife.

In 2015, Ted stepped back from his role as director of Cheesemans’ Ecology Safaris to focus on marine conservation. He still works closely with IAATO and, with his extensive experience as a leader in whale-focused tourism, sees a huge opportunity to capture scientific data to further our understanding and protection of whales. Happywhale was born out of Ted’s desire to create an innovative citizen science program that helps us better understand whales as individuals.

Back to Blog Next article