The Skua – a magnificent, beautiful and crucial member of the Antarctic ecosystem, but one often painted as the bad guy; the egg-stealing, penguin chick murdering polar pantomime villain. This mischaracterization is a matter I’ve made my mission to change.

My decade-long crusade to right this great injustice has had its high and low points.  In an attempt to spread the word about the Skua’s role in the Antarctic ecosystem I founded, with the help of other fair-minded and forward-thinking naturalists, The Skua Support Society in 2010.

I am a Conservation Biologist with a strong emphasis on ornithology and behavior.  On most expeditions to the Southern Ocean, I’ve worked on, I am often the penguin and seabird lecture guy.

Since the very beginning of my Antarctic career, visitors would arrive with a pre-existing distain for these majestic and highly intelligent birds.  The anti-Skua sentiment would often build and boil over at the height of the penguin chick hatching period. 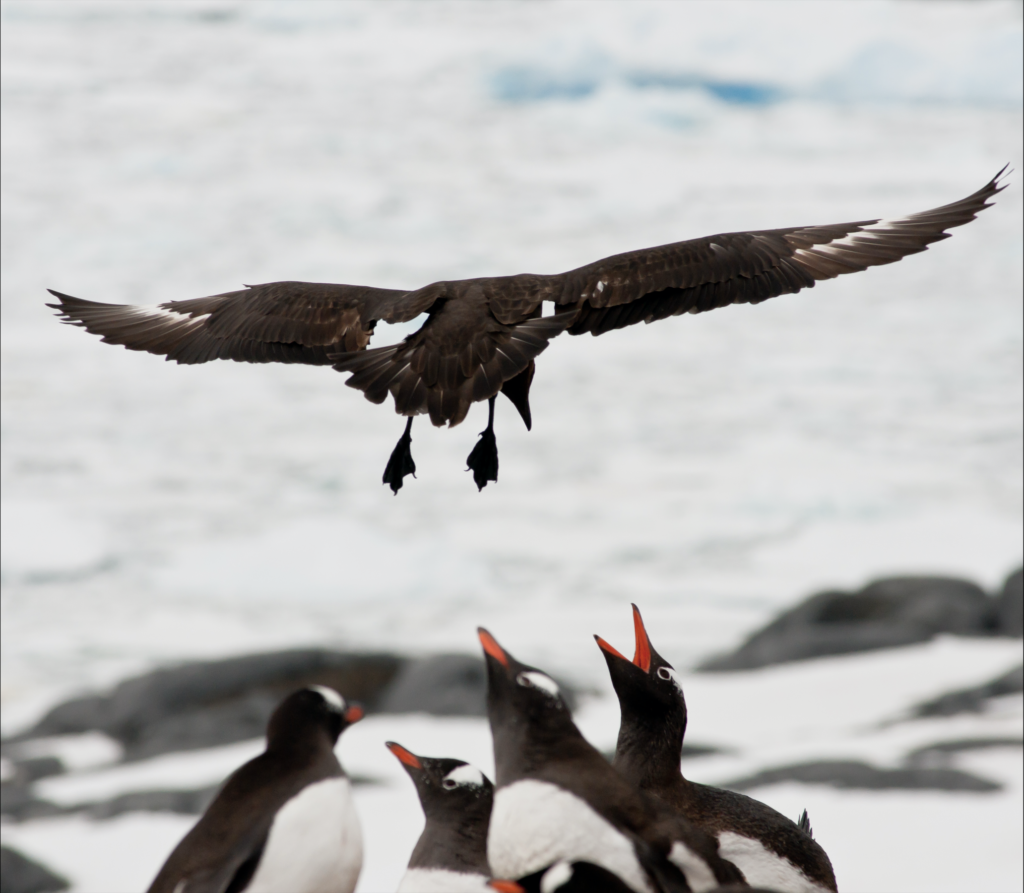 In extreme environments, such as the high latitudes, the relationships we observe and experience are often very cut and dry, there’s little room for highly complex systems due to the relatively low biodiversity.  In short, options are scarce and if you don’t evolve to exploit what’s available, well, you die.  Skuas take on many critical roles in this less complex system, in relationship to penguins, simply put, they’re the main “quality control” factor when these birds are forced on to land to breed.

In Antarctica the penguins have evolved to be highly successful marine animals feeding off of mainly krill and Pleuragramma (Antarctic silverfish).  Colonies form with tens of thousands of birds laying their precious two eggs in elevated, well drained, stone nests.  This behavior and the need for penguins to take to land in this fashion have provided a niche that is exploited by predators, and at the top of that list are the skuas. 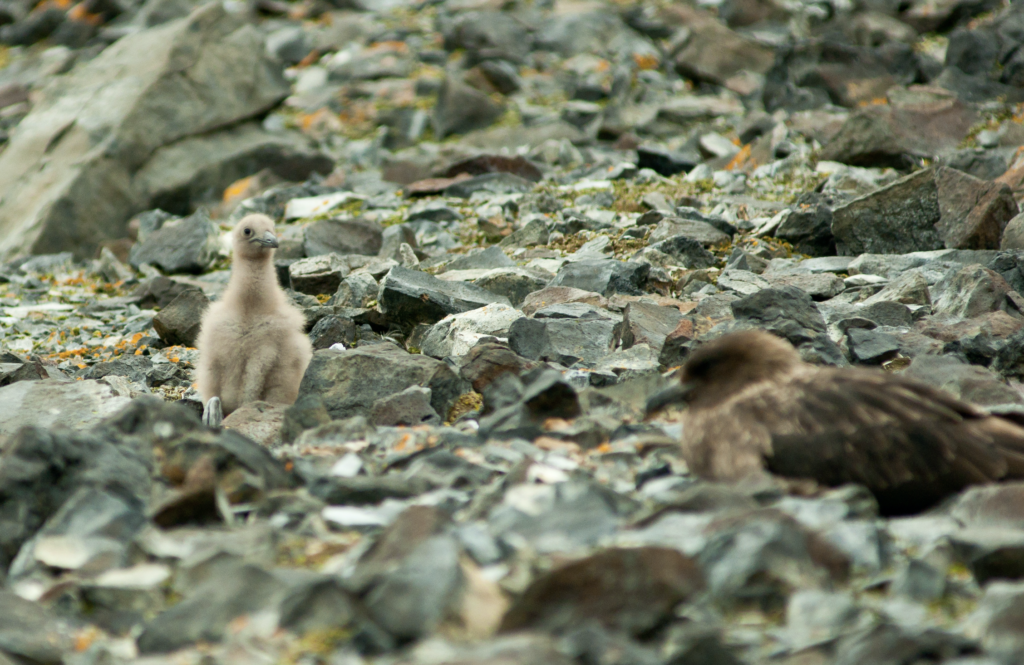 With the shores packed with penguins and their nesting rookeries, each a defensive structure of its own, it’s an inviting scene if you’re a highly intelligent, territorial, and well-armed predator. Skuas have evolved many different strategies to combat penguin defenses. Probably the most impressive is the tag-team tail-pull technique, wherein one skua poses a modest threat from the front of the penguin guarding the nest, while another skua, its mate, casually appears from behind, setting up a serious problem for the guarding penguin on the nest.  Often the skua in front carefully encroaches on the penguin, making it uneasy enough to begin leaning and reaching forward, eventually exposing the eggs, or chicks to the rear leaving them vulnerable to the skua strategically placed in the rear.  In a near instant the egg or chick is swiped from the nest and taken off to be eaten.  The skuas methodically work the weakest margins of the colony first, which is often occupied by younger or inexperienced -or down right unfit – penguin parents.  Just like that, you can witness natural selection in its rawest form and while it’s not pretty, it’s something to be admired, not recoil from. 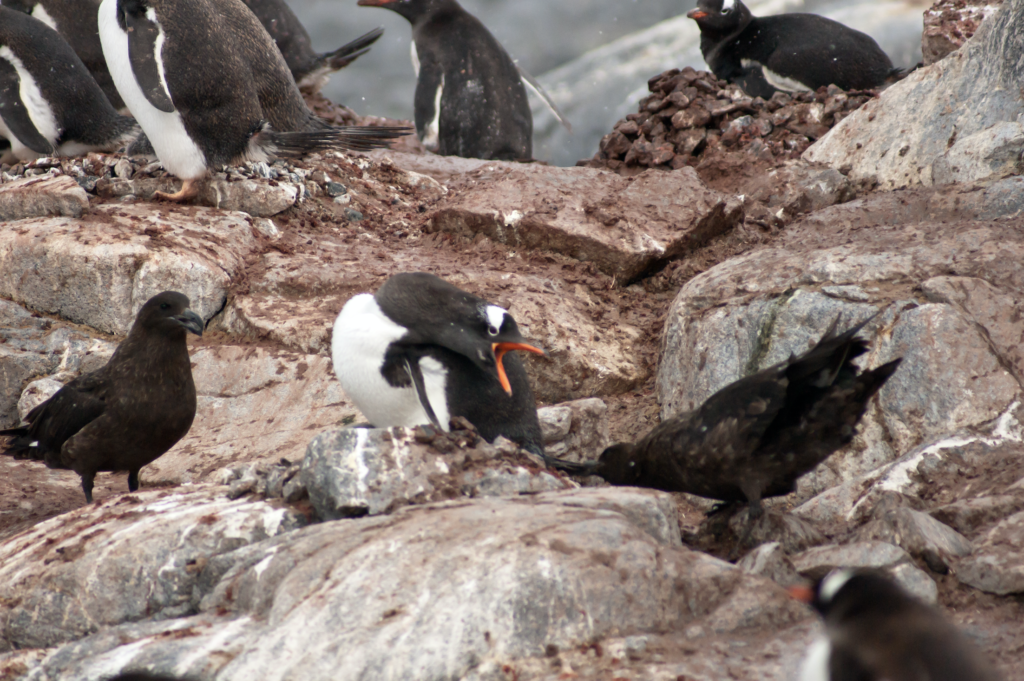 Skuas are vital and integral components in the Antarctic system and make their living in some of the harshest and most fierce conditions on the planet, they too have hungry chicks to feed during the short but highly productive Antarctic Summer.  They’re just doing their jobs – and let’s face it, nobody’s in shock over seeing skuas feeding on krill!

Down with the anti-Skua propaganda!

About the author | Doug Gualtieri 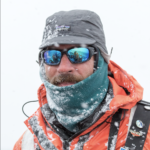 Doug Gualtieri has worked as a naturalist interpretive guide for over 20 years, beginning his career in Denali National Park and Preserve at a remote wilderness lodge leading hikes and giving lectures on the ecology and wildlife of that region.  In 2002 he began leading land visits to Denali on behalf of an IAATO-member operator, and has worked within the IAATO family in some form or another ever since.  With a background in Biology and a lifelong passion for the natural world, Doug moved to Talkeetna, Alaska in 1999 from his home state of Michigan, and never looked back.

Having studied many facets of the natural world, from general ecology to animal behavior, Doug found a strong connection to the life of birds; primarily because birds tie together so many components of our world, making them perfect teaching tools.  But, also because almost all of them fly, and that’s pretty cool.

It was his love of birds – and in particular his dismay at the mischaracterization of the Skua as Antarctica’s ‘bad guy’ that led Doug, with the help of other fair-minded and forward-thinking naturalists, to create The Skua Support Society in 2010.

Doug and his wife make their home today in the quaint, and at times, bustling Alaskan community of Talkeetna.  Living in their cabin home in the boreal forest complete with a pristine salmon stream, they spend their time with their dogs on hikes, skis, or bikes enjoying the beauty of Alaska and the thriving community they live in.